What does Clean-Up do? [PRO]

Only one match type should be used in each ad group. This means that in the campaign structure, a broad ad group actually contains only broad keywords. The same applies to phrase and exact.

With the 'Clean-Up' service, you can now ensure that this is always the case with your ad groups. 'Clean-Up' cleans up your ad groups by, for example, shifting an exact keyword that was incorrectly assigned to a broad ad group into the correct exact ad group.

Note: The changes based on the Clean-up are not recorded in the rules log.

Note: Clean-Up can only move keywords if the corresponding target ad group exists. Also, negative keywords can be created only in those ad groups that are also linked in the campaign structure.

When Clean-up is activated, it works for every row where multiple ad groups are connected. This applies regardless of the advertising type of the row.

The following example illustrates the described procedure with the keywords 'soccer' and 'ball': 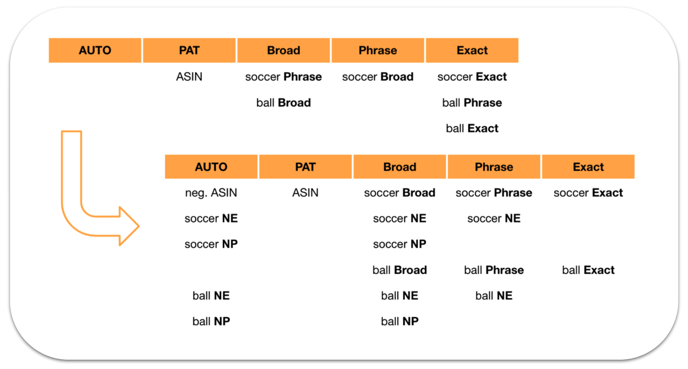